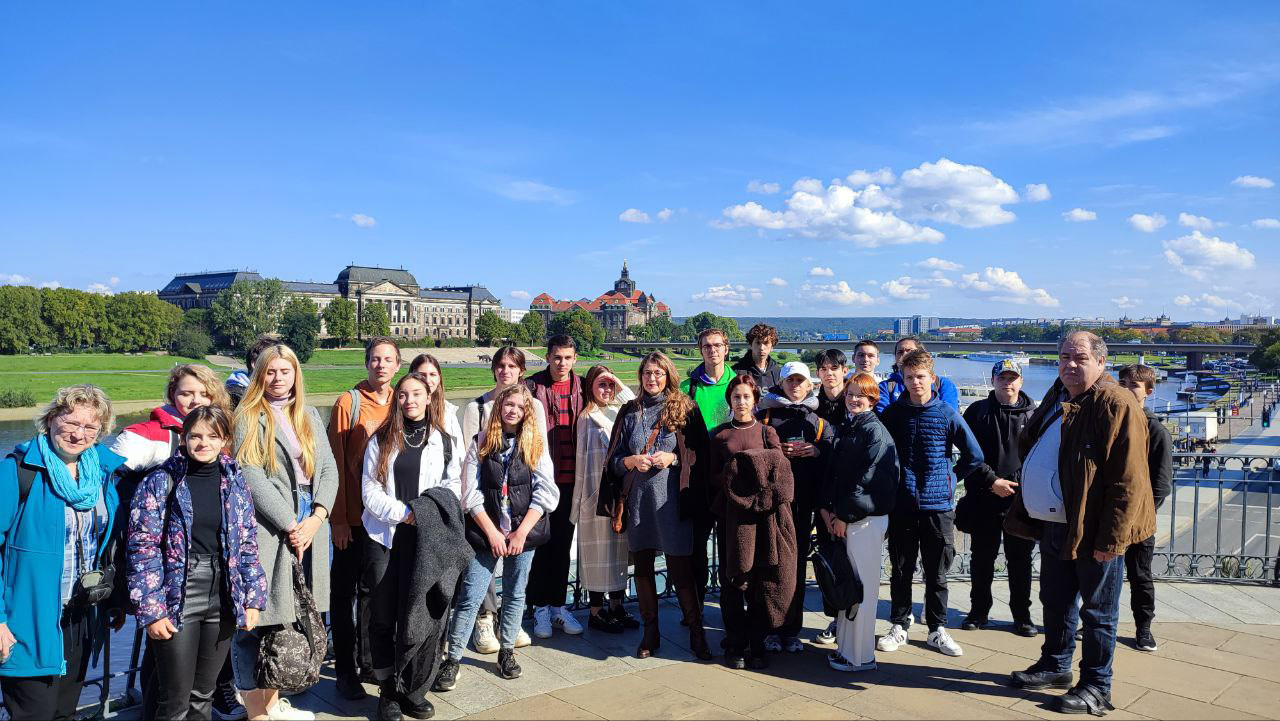 Our day trip from Berlin to Dresden led us through some of the most beautiful and picturesque landscapes of Brandenburg and the Free State of Saxony. With the Theaterplatz as the starting point of our guided city tour we already found ourselves amidst one of the most famous architectural highlights of Dresden. With a mixture of curiosity and excitement we learned a lot about all the different aspects that made this city so special.

The history of the Dresdner Residenzschloss, the historical fate of the „Hofkirche“ (court church), the planning and making of the Galerie Alter Meister, and the painful aspects of the Semperoper are only a few stories in the history of this  fascinating city. On our way we popped into a big stone bearing the inscription of Napoleon Bonaparte. There goes a rumour that each person who touches the stone gets all the positive qualities of the French Emperor. It goes without saying that- at this point of our tour- we had our most „touching“ moment. Then we passed the sculptural ensemble „Vier Jahreszeiten“ (Four Seasons) and climbed a mound to its highest point which forms the so-called „Brühl’s Terrasse“, giving way to a breathtaking view to the Elbe and the picturesque riverside. In former times the most famous German Poet, Johann Wolfgang von Goethe,was so impressed by the view from the Brühl’s Terrasse that he called it „the Balcony of Europe“.

Passing both the Hochschule der Künste Dresden and the Galerie Neuer Meister we reached the impressive Frauenkirche, destroyed during the Second World War and rebuilt by 2005. Our guided tour through the old town of dresden ended right in front of the famous „Fürstenzug“, a most impressive relief made of pure Meissen porcelain which is 102 meters long and shows the succession of all saxonian monarchs throughout history.

In high spirits we went to the Galerie Alter Meister where we learned about some of the most famous artists of the Renaissance Period and the Baroque Period like Tizian, Raphael, Rubens, and Rembrandt. We all felt both lucky and honoured to be given the chance to take a look at the Sixtinische Madonna (Sistine Madonna) by Raphael.

At the end of our trip we visited the Treasury of the „Grünes Gewölbe“ (Green Vault) with all its breathtaking jewelries once collected by the House of Wettin, a Saxon dynasty. 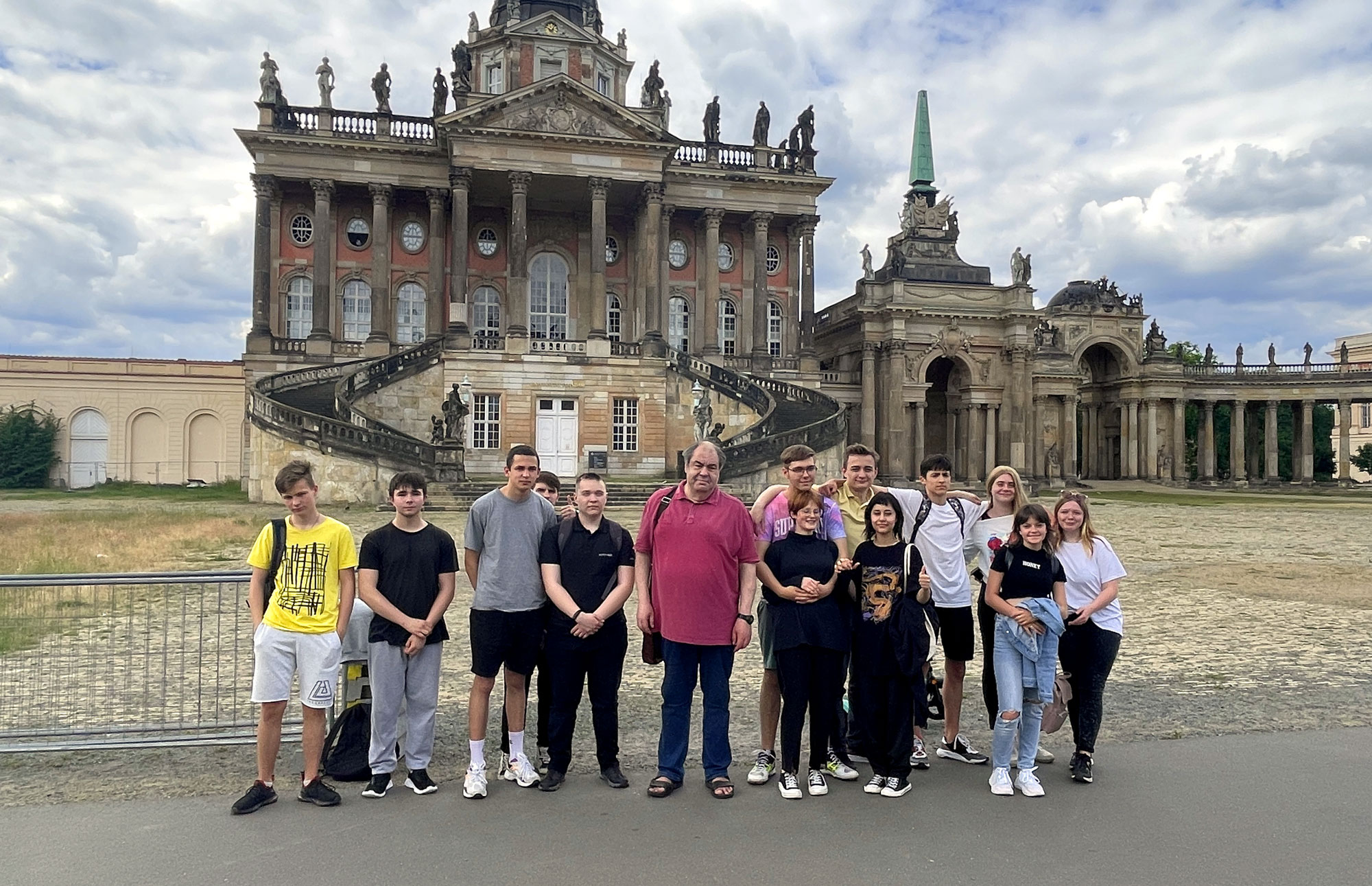 On the 12 of June, we, the Ukrainian pupils of the Barnim Oberstufenzentrum I (OSZ I) in Bernau went on an excursion to the beautiful city of Potsdam.

We were guided by our teacher and our parents.
Travelling in a double deck vintage bus and equipped by audio-guides we learned about the checkered history of Potsdam with all its historic events throughout the past centuries.
As our first stop we went to the “Neues Palais”, a huge and impressive building which houses the Potsdam University today. On our way to the next highlight, Schloss Sanssouci (the Sanssouci Palais), we passed the charming Orangery, situated within this beautiful park full of sculptures and fragrant flower beds.
The Sanssouci Palais is a wonderful example of the so-called Rococo architecture and Frederick the Great’s most beloved summer residence. Guided by sunshine and high spirits we came across the Alexandrowka while we were heading for the Cecilienhof.
The Cecilienhof is one of the most significant historic places, where Harry S. Truman, Winston Churchill and Joseph Stalin once negotiated the faith and future post-war Germany and Europe.
Our wonderful tour was rounded off in the “Holländisches Viertel”, the so-called “Dutch Quarter” with its unique Dutch flair and architecture.
By the end of the day we all felt that our excursion to Potsdam has been a good mixture of information, excitement, pleasure, and enjoyment. 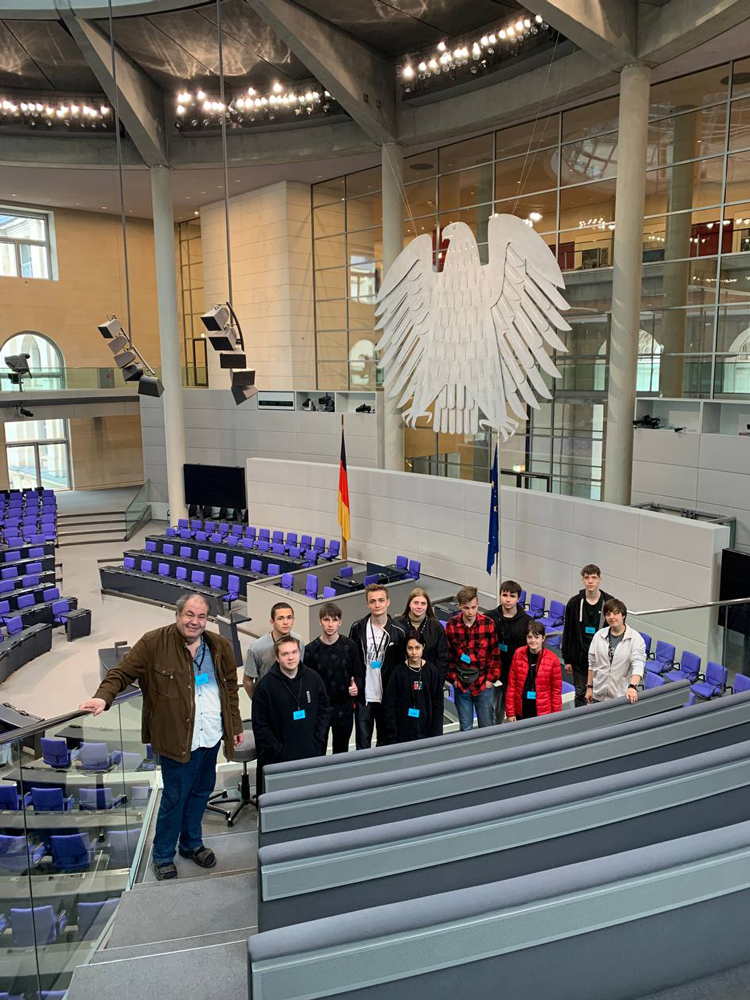 In order to bring our Ukrainian guests closer to German culture and society, a tour through Berlin was organized by the OSZ 1 Barnim with a guided tour through the Bundestag. Above all, we would like to thank Mr. Mjodow for the organization and support. This day was made possible through his commitment.